The Vogue in question

This week popular feminist site Jezebel embarrassed itself by offering $10,000 to anyone who could provide the before-photoshop shots of Lena Dunham’s US Vogue cover. Now, I love reading Jezebel on a daily basis. It’s a bit hit and miss, but generally I appreciate its mixture of popular culture and feminist analysis. Though this latest stunt has got me wondering: when it comes to cultural analysis, what is worth spending our time worrying about?

This has really been on my mind since I read this article from The Guardian, that asks “should popular culture be a site for political debate?”. Aside from the bit about the “deluge” of Miley Cyrus analysis (which gave me pangs of PhD fraud-guilt), I generally agree with the gist of the article. We should be careful not to get too caught up in deconstructing particularities of entertainment, lest we forget the bigger issues – of binary gender, economic disparity, racial prejudice, and so forth.

In other words, we want to be careful that we can still see the political forest despite the pop culture trees.

Given that popular culture is a huge part of daily life and a source of enjoyment for many people (whether we agree it should be or not) it certainly warrants attention. But I do agree we should make sure our critique doesn’t become so narrow and specific that we miss the point. From what I can see going on in the Dunham-cover debate, there is a pretty narrow focus not on a tree, but on a tiny bug sitting on a leaf.

And it’s not like the issue of photoshopping doesn’t deserve attention, it’s just that we have the same conversation time and time again. It goes something like:

Prosecutor:
“BEFORE this woman looked NORMAL and BEAUTIFUL…
But then society deemed that she was NOT BEAUTIFUL ENOUGH.
Oh the TRAVESTY that we can’t just be our bumpy NORMAL selves”

Defendant:
“What do you EXPECT, the public want to see BEAUTIFUL people.
I mean, if you want to see FAT and UGLY just go out on the street.
This is FANTASY, this is fashion, it is MAKE BELIEVE”

And so the banal conversation continues, until we have it again next time someone’s leg or muffin top is lopped off by photoshop. And we’re so busy having this debate over whether it is permissible for fashion magazines to have shiny airbrushed people in them, that feminism goes over to the corner and dies from boredom.

I mean, if we’re going to spend our time and money ($10,000, really Jez?) critiquing Vogue, why not look at it’s full-on reinforcement of class disparity? Why not look at it holistically, as a cultural artefact: what does it keep us aspiring to? That it proposes a vision of beauty that isn’t just a particular form of femininity, but is perhaps more grossly white, upper-class and heterosexual?

Is it just me, or are “real women” all veeeeery similar looking…

And part of the problem with focusing on photoshopping as *the* political issue, is that we then so readily accept “normality” as a selling point. Take the various Dove campaigns around “natural beauty”. We dance in jubilation – finally a company willing to show normal women! Never mind what might be left out, or the fact that this is all done in the name of profit. 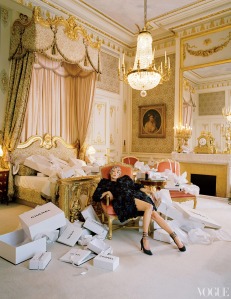 No photoshop here? No worries!

When we’re doing these analyses, why don’t we ask: who is the *real* enemy?
The women posing, willingly participating in their objectification?
The individual photoshoppers, for being so brutal with their brush?
The editor of Vogue, for dictating what is socially normal and acceptable in fashion and beauty?

I’m not saying that individuals are devoid of ethical responsibility. I’m not even saying we should stop reading Vogue or Jezebel, and strip off all our clothes and makeup and run into the bush and live like a hermit (that’s a different conversation). But I am saying that when we invest our time in critical analysis and commentary, we also need to make sure we focus on the wider picture.

9 thoughts on “Photoshopocalypse: there’s more to be worried about than airbrushed legs”