IWD: what’s it really about?

Every year on March 8 International Women’s Day rocks around and each time I find myself deeply troubled by events being held in its name. I’ve written about IWD before (which, upon re-reading led me to the awkward realisation that keeping an academic blog means that any early or continuing naivety is laid bare before the world). To save you from reading it: I had attended a luncheon being held in my city that I found irksome for its ethnocentric focus on the foreign woman as “Other” – the (apparent) victim of sisterhood’s failure to go global. I also had a problem with the speakers’ general reinforcement of the binary man/woman given that there was no critical discussion of the concept of gender. Then (and this is the bit I feel retrospectively weird about) I went on to lament how bad it is to exclude men because we’re so busy shoring up women’s rights. 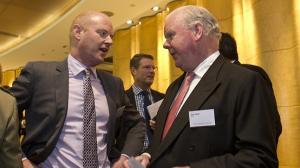 So a few of those qualms hold true: I still find the championing of “look how far we’ve come, let’s go save those women over there!” problematic, and I wish that there were more focus on debates about gender on this day. But I feel strange about my “what about men too” plea because I think that really missed the point of what I was trying to say – and it took an IWD event planned for 2014 to make me realise this. I won’t name the event, or who’s organising it, but basically they’re holding a IWD talk with two notable and powerful men and one less notable but still “successful” woman as the key speakers (does this not remind anyone of that episode of Parks and Recreation where Lesley Knope creates a committee for women and all of the people elected to it end up being men?).

Not wanting to prematurely judge this lineup, I called the event organiser to see what the reasoning was for these keynotes. The organiser told me that originally they had planned to have just one woman and one man, and then another prominent man had contacted them and they couldn’t say no. They told me that ultimately it was a great thing, because they are big names and are attracting lots of people for the event. I was also reminded by the organiser that men should be champions of gender too, and that the burden of change for women should be on everyone’s shoulders.

Now of course I agree that far too often in history the question of gender has been imagined as solely the domain of women. But let’s not forget that the women’s movement (at least in its second incarnation) emerged in part from men in the 1960’s New Left dismissing “women’s business”. For example, when Shulamith Firestone and Jo Freeman proposed that women be equally represented on the committee of the National Conference for a New Politics in Chicago in 1967, they were told to “cool down”. In other words, women became the spokespersons for gender issues because nobody else would take them seriously. So of course it’s great that men are taking it on board now, but does it not seem absurd that as part of this men would actually be allocated a greater amount of time to speak on a day when we should be challenging norms of representation?

The “successful” woman: is this what IWD is about?

And I’m not suggesting that this conundrum would be fixed by a 50-50 split: the problem is much deeper than that and at a fundamental level involves (from what I can see) a dominant picture of IWD as a day to celebrate “successful” women and consider how we can make other women “successful” too. The problem with this narrow raison d’être is that it then seems reasonable that men are the notable speakers – hell why not an entire panel of men championing women? If all we care about is promoting women to be successful, it doesn’t matter that we’re not hearing from women. It doesn’t matter that we’re not hearing about the lived experiences of gender from people in community. It doesn’t matter that the panel is all white, all straight, all “successful”. Who cares – all we want to talk about on IWD is getting women up that ladder.

What could we do instead of this same-old neoliberal IWD claptrap? Well, we could hold a range of talks or events that would actually apply some ideas from gender studies to IWD. Basically my ideal IWD would include discussion of these kinds of topics:

This could include people of all different backgrounds and notoriety. You could have people with fiercely different ideas about what gender means, what being a woman means and what feminism should hope to achieve. The day would probably be full of severe debate as we realise our radically different perspectives on these issues and listen to people’s lived experiences. It may sound arrogant to propose involving people from across the community in some discussions which would be quite academic – but don’t forget, feminist writing has always straddled the popular/academic divide. And why not invite people from the community to speak instead of just women who have “made it”? Usually we only consider women who are earning lots of money and are well-known names to draw a crowd. And while men would be involved for sure, these might be trans men, gay men, young men in a new age of masculinity…men with diverse experiences of gender too. One thing’s for certain, the event would not be 2/3 old white guys.