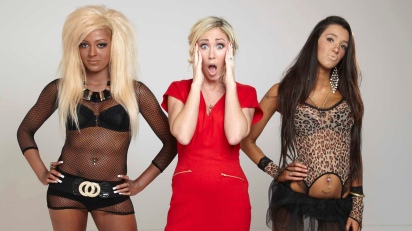 Recently I published an article in the journal Australian Feminist Studies titled “Queer Femininity Versus ‘Natural Beauty’ in Snog, Marry, Avoid“. In the article I discuss the way that femininity is represented on the BBC’s Snog, Marry, Avoid – the show where they take “extreme” women and give them a make-under to help them fit in.

I won’t go over all of the details of my analysis of the show, but in a nutshell the point I make is that the “natural beauty” promoted by the show is far from liberating. In fact, the contestants are merely presented with a form of appropriate gender that they must conform to, which restricts rather than frees them.

Indeed, if we consider the women prior to make-under we can see that their “inappropriate” and excessive femininity is actually queer in many ways. That is, “queer” in the theoretical sense of making the familiar strange and subverting ordinary understandings of gender and sexuality.

It may seem anti-intuitive to say that women who are covered in make-up, wearing extremely short dresses and who have outrageous hair extensions are queer in any way. The usual sentiment that would circulate about such women is that they are a product of a problematic “raunch” culture where women are compelled to be sexy and one dimensional.

However what we see in Snog, Marry, Avoid is that these women are not treated as “normal” at all. Rather, they are marked out as deeply problematic and in need of transformation.

A contestant hears that a man would prefer to “avoid” her

Men are interviewed on the show and are asked whether they would like to “snog, marry or avoid” the contestants. Their responses (almost always negative) are used to justify why a make-under is essential for the woman in question. The women who don’t want to change are ridiculed as ridiculous and disinterested in being attractive.

This is where the idea of “queening” is helpful. The term is an inversion of queer theorist J. Jack Halberstam’s “kinging” referred to in the book Female Masculinity. In this text Halberstam looks in part at female drag kings and the kind of masculinity they present. Kinging describes portraying masculinity via “understatement, hyperbole, and layering” that makes obvious the performative aspects of gender.

In the same way, the contestants on Snog, Marry, Avoid are involved in exaggerating femininity and showing it up. The contestants often talk about wanting to look “fake”, and the show frequently points out how the women indulge in/are obsessed with “fakery”. In this way the women are queening rather than kinging – making obvious their adopted feminine presentation. In contrast, when the women are made-under their gender is portrayed as “natural” despite the fact that they are still wearing make-up, have had their hair styled, and so on – sometimes they are even wearing wigs! Here another kind of queening is going on, where they are compelled to perform naturalness.

A typical before (left) and after (right) shot on SMA

Rather, we ought to understand gender as something that is determined by social expectations and norms, where some people are considered “normal”, and where others fall outside of these constructed boundaries and are often compelled by society to conform. Ironically Snog, Marry, Avoid does help us to see this, if we analyse the show for what it is contained within it rather than the narrative of normalcy it attempts to enforce.

5 thoughts on “Queering and Queening Femininity”