My Internet history is a Snow/Kendrick love fest

It’s strange, but true: at least once a week I sit down and Google the celebrities I think might be not-straight. There’s Anna Kendrick and Brittany Snow (hoping the Bechloe romance of Pitch Perfect finally comes true), Leighton Meester (sure she married Adam Brody but…), Naomi Watts, and Emma Stone (to name a few). Up until fairly recently Ellen Page, Miley Cyrus and Kristen Stewart were also on my list. They make up what I like to imagine is the “Secret Lesbian Club” of Hollywood. In my mind, this is basically an underground ring of awesome gays who like to get together fairly frequently to watch Bound, talk about butch/femme aesthetic, read gender studies texts, and figure out ways to insert queer subtext into their work. And who do I imagine is at the centre of it all? Taylor Swift of course. 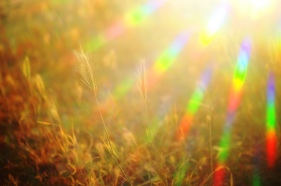 Life is more interesting through a rainbow filter

Some might say this is wishful thinking. But the thing is, when you spend most of your days thinking queerly (that is, making the familiar strange, particularly with regard to sexuality and gender), you can’t help but see the world through rainbow glasses. It seems to me that “normal” is entirely a fiction, and everyone is a lot queerer than all that. That doesn’t mean there aren’t people with “opposite-sex” or “heterosexual” desires, but just that: a) what we ordinarily make of pairings along these lines belies the complexity of human experience; and b) a lot of people are probably a lot less distinctly straight (or gay) than assumed. With this in mind I look to Hollywood, which produces so many of the cultural texts we consume that show visions of a perfectly normative heterosexual life. I spend much of my time—as is tradition in queer theory—re-reading texts differently, to uncover the hidden queer subtext in popular culture. So, why not re-read the lives of actors themselves, given that we can be 99% sure that the narratives produced about them by tabloids and other press are also entirely fiction? 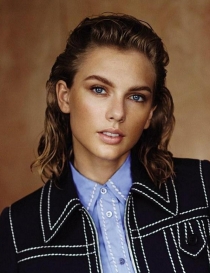 For me Taylor Swift is the perfect example of someone we ought to re-read, because she is held up as the epitome of the normal, wholesome heterosexual girl of today. For one thing, she made her debut on the country music scene, which is notoriously unfriendly to the gays—despite producing a bevy of flamboyant stars who epitomise the queer concept of “camp” aesthetic (Dolly Parton, for example). The boy crushes of Swift are heavily interrogated in the media, and her relationships with women are (for the most part) understood as purely platonic. However, if you look a little closer, we can see a queer subtext in Swift’s life and oeuvre that suggests a rather more fluid expression of desire. Here are a few things to note:

It just doesn’t look fun for anyone

She dated Taylor Lautner and it was really awkward
There is no doubt that it is common practice in Hollywood for studios to pair stars up for promotional purposes. This is referred to as “showmance”. But there is also the well-known though little-discussed practice of “bearding” (typically this refers to setting up gay male actors with female stars) or in extreme cases “lavender marriage” where the charade involves putting a ring on it (Rock Hudson is one well-noted example). We can’t be sure whether is was a bearding scenario when Swift and Lautner got together, but they sure were very showy yet extremely uncomfortable together.

Having a much better time

She used to have a pretty intense relationship with her violinist
During her country music days, Swift toured with a band which included violinist Caitlin Evanson for eight years. Unlike those Taylor x Taylor pics, Taylor and her violinist had sparks galore. Evanson, who is ten years older than Swift once commented, “Taylor is a 40 year old in a 19 years olds body”, which is just the kind of thing you’d expect an older girlfriend to say about their younger lover. 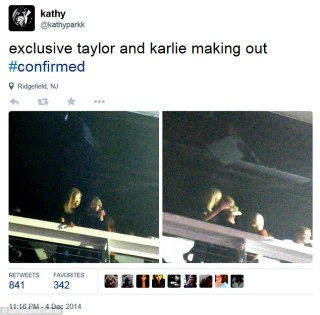 There was that time she apparently kissed Karlie Kloss
Karlie Kloss is supposed to be the closest of Swift’s girl-clan, and in 2014 they were spotted kissing at a club. The photos are pretty dodgy and might well be fake. But I include this point here because it started a bunch of rumours about Swift’s sexuality, which is important for the next point.

Her song “New Romantics” is probably about being more than straight

Swift’s new single off 1989 includes a number of lyrics that reflect a queer subtext. These include:
1.”We show off our different scarlet letters— Trust me, mine is better”: given that scarlet letters refer to adultery, Swift is basically saying here “I’ve got other partners but they’re not who you expect”.
2. “We team up then switch sides like a record changer”: note here that Swift doesn’t seem to be just referring to switching partners, but switching sides.
3. “The rumors are terrible and cruel/But, honey, most of them are true”: this might be referring to the gay rumours as noted above.
4. “And every day is like a battle/But every night with us is like a dream”: this suggests an outside persona that clashes with what goes on behind closed doors, specifically with a partner.
5. “The best people in life are free”: this might refer to the practice of studios paying for beards. Swift is saying, the best people in life are not the ones you get contractually set up with.

“I Know Places” is about secret love
One thing you can say about Swift’s hetero romances, is that they are very very public. Instagram pictures posted by Swift, hundreds of photos in gossip magazines, TV interviews, and so on. However this song from 1989 refers to a love that Swift must hide away. The song also starts with “You stand with your hand on my waist line/It’s a scene and we’re out here in plain sight”, which suggests a romance that might not be perceived as one at first. This might be a reference to that phenomenon that people will believe anything before they believe you’re in a gay relationship—i.e. “oh, you’re sisters?” or “you guys are such cute best friends” etc.

Let’s be clear here: I don’t want to essentialise sexuality, like it’s some nugget of “truth” that can simply be unearthed like a buried crystal. But I do think there is some benefit in cracking open what is considered normal, so that we can begin to see how this is really just a fiction that *no one* lives up to. This also isn’t to condemn those who do not “come out” of the proverbial closet, because we ought to realise that attempting to live up to the fiction of normality is often enacted as a mode of survival. The horrible reality is that once stars come out they can’t survive easily in Hollywood. Among others, Elliot Page has talked about how he struggled to get parts playing straight characters once they publicly declared their sexuality.

In any case, you might be thinking: why care about Taylor Swift’s sexuality anyway—shouldn’t that be none of our business? Fair point. Perhaps when you apply a queer “re-reading” to real people it can all get a little…gossipy. Despite this, I continue to hold onto the fantasy that our icons of culture aren’t all that straight and narrow. I think I care so much because I grew up looking and acting pretty heteronormative, and was treated as such. But while I had mad crushes on boys and aspired to extreme girliness in aesthetic, my desires were not simply straight. I had girl crushes too, I just didn’t know how to make sense of my complex range of feelings. I guess that’s why I hang onto the idea that there’s a Secret Lesbian Club in Hollywood, headed by the girliest boy-mad celebrity of all…because in that alternate universe, sexuality might be hidden but it sure isn’t black and white.

9 thoughts on “A Tale of Beards and Lavender: Imagining the Secret Lesbian Club of Hollywood”