When I talk to people about gender and sexuality, a lot of people tell me that they “don’t fit into any category of sexuality”. Then I tell them about pansexuality, and I usually get an “oh, right. That’s what I am”.

Pansexuality describes a sexual orientation wherein a person has the ability to be attracted to a diverse range of people across sex and gender spectrums. Pansexuals describe their attraction as different from bisexuality, which only considers the gender binary- if you are bisexual, by definition you are attracted to either men or women. Thus it is often claimed that pansexuals are “gender blind” (though some pansexuals would argue that this is not the case- sex and gender may play a role in attraction, but their sexual orientation doesn’t rule anybody out because of their sex or gender presentation).

While academia seems to be running to catch up, some of the most interesting perspectives on pansexuality come from YouTube posts like this. What seems startlingly obvious about the presence of pansexual self-proclaimers on the internet, is their age. While I’m sure that with the evolution of the term into more popular usage there will be more and more people of all ages that adopt the category to describe their own orientation – but for now, it seems that (overwhelmingly) Generation Z is embracing the idea. 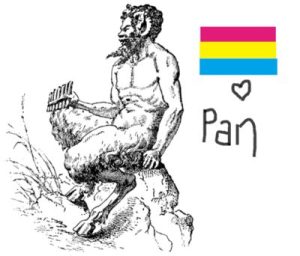 It will be interesting to see how this identity discourse will pan out. What effect will pansexuality as an accepted and well known sexual orientation have on our views on sexuality’s relationship with the gender binary in the first place?

After all, I can’t help but wonder whether some people currently identifying as bisexual meant something closer to pansexual all along?

7 thoughts on “Pansexuality: because bisexuality is so passé?”