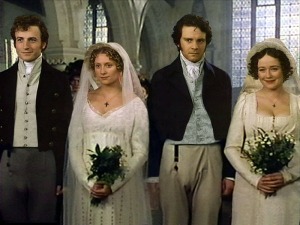 Everyone loves a good wedding (BBC’s Pride and Prejudice)

I went to the movies this evening and saw what was a funny but pretty middle of the road comedy. I don’t want to give away any spoilers, but let’s just say it was your normal Hollywood light entertainment piece (*talking bear cough*). The film was actually quite enjoyable, but had the most predictable and un-funny ending ever. You guessed it, a wedding.

I left the theatre wondering why it is that we don’t seem to be able to get past this neat little plot device. Maybe it’s just the easiest way to spell out “all’s well that ends well”. After all, Shakespeare’s comedies always finished with giant group weddings and frivolity. But you’d think that in this era of increasing divorce rates, surely we’d be imagining some alternate models for spelling out happiness? Much like the beloved Bechdel test, I feel like we need a rating system for romantic comedies that don’t equate true love with a wedding fest.

But then, when I tried to think of romantic comedies that did (or didn’t) end in weddings, I could only think of the most obvious ones – The Wedding Singer, Four Weddings and a Funeral, My Best Friend’s Wedding, Bridesmaids… 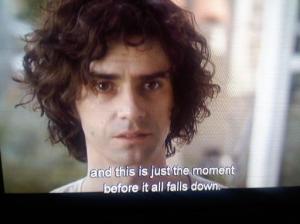 From Miranda July’s ‘The Future’

Then I came across this excellent list of romcoms that are not your typical Hollywood fare but have done well nonetheless, and there’s not that much weddingery in sight. Films listed include Eternal Sunshine of the Spotless Mind, Vicki Cristina Barcelona, Before Sunset… But what’s interesting about many of the pics on this list is that the “happy factor” at the end is debatable. Most of them have a sense of hope mixed with bittersweet realism and often just plain old sadness and loss.

In the end I say give me emotional realism over fantasy wedding bonanzas any day. I’d rather leave the cinema feeling a little heartbroken, than walk away and forget the film in much the same way that one passes apple juice- quickly and with little to digest.

4 thoughts on “Because life ends at marriage?”