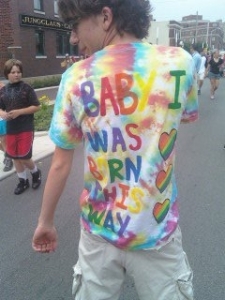 “If you don’t have any shadows, you’re not in the light” – LG

In 2011 Lady Gaga wrote a song that has become a bit on an anthem for the LGBT movement. Though Madonna would like to point out that she helped with the tune, Born This Way is a pretty amazing song for using and normalising terms like bisexual and transgender within a popular realm (plus just generally encouraging the listener to feel empowered). It seems that in this song Gaga is promoting the political line that people should be respected because their attributes are predetermined.

Don’t get me wrong, I think that this is a valuable sentiment and has certainly been a central argument for LGBT activists for some time now. There are already a number of people out there writing about how we aren’t “born” but rather “made” (i.e. socialised into being) and I’m not here to make that contention. My problem isn’t so much with the idea itself, but why we need to make it in the first place. 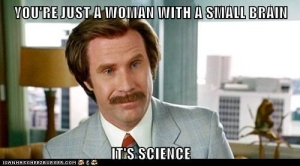 I just don’t think we should have to argue that someone was genetically pre-determined to be XYZ, in order to accept them as the human being that they are. It just seems silly. Plus this line of reasoning inevitably leads to lynch-mobbing as soon as one LGBT activist says, “well, actually I personally don’t feel I was born this way” (see the Cynthia Nixon debacle). Admittedly the biggest factor beind the born-this-way line of reasoning is probably that it is a reaction to the crazy bucketloads of homophobia and hatred based on the notion that being gay is “immoral” or “unnatural”. And who wouldn’t react to such violent exclusion with an argument that says, I can’t help it, it’s science.

But if we keep trying to win all of our arguments on the basis that it’s science, what happens if one day (some how) they “prove” that sexuality isn’t pre-determined? What then? Do we just chuck out all of our politics? If this ever happened, one way to turn it around would be to say… “so I guess being born ‘straight’ isn’t a thing either…?” And the whole question of the natural versus the unnatural would be turned on its head.

At the end of the day, people should be respected as the human beings that they are. Full stop.

2 thoughts on “Why being “born this way” shouldn’t matter”