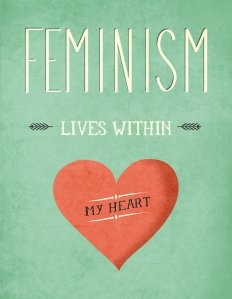 Feminism and I go way back. For one thing, my grandmother used to write STEREOTYPE in big, bold letters underneath problematic pictures in my colouring-in books, such as wart-nosed witches, or coquettish Disney Princesses getting married off to their rather dull princes (if nothing else, this instilled in me a fervour for cultural criticism at a young age). I also had my mother, less the radical-separatist type, more a non-identifying new third-waver, which largely explains that my first tape at the age of four was Madonna’s Immaculate Collection (which I have to say ensures some rather awkward conversations, like when you jump around the lounge room singing “Like a Virgin”, which leads your mother to ask, “Do you know what that word means?”, a series of lying nods, and “the talk” before you’ve even got this Kindergarten thing down pat). I read The Paper Bag Princess, played with Motherpeace Tarot cards, and went to all number of Reclaim the Nights, and pro-choice rallies.

Of course with this kind of upbringing, I didn’t identify explicitly with feminism. That was just assumed, background information, something everyone was au fait with (I thought). In fact, I actively rejected many of the feminist critiques I was exposed to. Much to the chagrin of my family, I demanded to wear dresses. I loved pink. Fairies. Ballerinas. Makeup. In my lifetime I have managed to have not one but three makeup-themed parties (though, on all occasions I was less interested in beautification than I was drag-queening).

Later, despite choosing university majors in psychology, political science and philosophy, I managed to write about sex, gender and sexuality whenever possible (a trend unfortunately only evident in hindsight). But it wasn’t until I began my honours in philosophy, that I finally read Simone de Beauvoir’s The Second Sex – which was a revelation. After that I took a giant leap straight into Judith Butler territory, sparking a rather dense love affair with her textual genius. But theoretically, I jumped from a foundational second-wave text to a pretty intense critique of all things gender. I’ve spent the years since then catching up on a lot of the feminist texts in-between and since the great Gender Trouble, but it’s fair to say I’ve taken the queer theory path rather than the recuperative one you see feminist writers like Angela McRobbie taking now (in Aftermath of Feminism McRobbie levels that the work of JB contributed in part to feminism undoing itself).

This for example, is some crazy bullsh*t

The point is, a lot of the time, I find myself challenging many of the encompassing explanations of oppression presented by feminist writers and thinkers, instead proposing sneaky little queer readings of things that might otherwise be held up as extremely problematic and supportive of the patriarchy (for example, the much condemned antics of Gaga, Miley, Britney, Katy – I just can’t help falling in love with these women and I will defend them to the death god dammit!). But then at odd and unexpected times, I find myself confronted with street harassment, anti-abortion preachers, or even just vaguely misogynistic comments on social media, and I am reminded hey wait a minute, feminism isn’t always perfect….but it’s still pretty tops. After all, feminism doesn’t mean just one perspective – for me at least, laying claim to feminism in part just means caring about questions of gender.

As Butler put it herself in the 1999 preface to GT, “I was writing in the tradition of immanent critique that seeks to provoke critical examination of the basic vocabulary of the movement of thought to which it belongs”. In other words, one can write from a critical space that is also ultimately founded in feminist thought. And while I can’t help agreeing with some authors like Janet Halley, that it can be productive to “take a break” from feminism sometimes, I can also never forget my feminist roots.

11 thoughts on “My Struggle With Feminism”