An image from the Tree Change Dolls’ tumblr site

Today a friend sent me a link to a new trend that basically caused me to have a rage blackout: dolls that have been “made-under”. Labelled “Tree Change Dolls“, these are generally hyper-feminine styled dolls (such as Bratz) that have been found at op-shops and transformed through changing their hair, shoes, makeup styles and clothing, to look more normal and natural. In the words of their creator, Tree Change Dolls involve “swapping high-maintenance glitz ‘n’ glamour for down-to-earth style”.

But before you all rush off to procure a Tree Change Doll of your own, it’s worth unpacking what it means to “make-under” a doll. Is it more ethical (as the subtext of the Tree Change Dolls website would suggest) to have a doll adorned with the natural beauty look, rather than the hyper-feminine aesthetic more commonly seen? And why is a make-under really any different to a make-over?

Firstly, let’s look at one before and after image from the site and what a make-under involves:

1. Reducing prominent and cartoonish features such as the eyes and lips
2. Removing signs of obvious makeup
3. Conditioning and relaxing the hair which is worn out rather than having it styled up
4. Starting with a naked doll and finishing with a clothed one
5. Maintaining a clear complexion one the face of the doll free of any abnormal markings

Here we can see that the effect of “stripping back” actually mimics a “putting on” of layers. Quite literally the features of the dolls are transformed to conform to a different standard, that of “down to earth style”. In effect, the dolls are not made-under, they are made-over, with the same dramatisation of before and after we would expect from any other visual representation of stylistic aesthetic change.

Another Tree Change Doll, so liberated

Rather than radically challenging or interrupting expectations of femininity, the Tree Change Dolls set up a new system of signifiers in hyper-femininity’s place: the end result being a set of dolls that all look remarkably similar. The dolls featured on the site all have similar “natural” faces, wear knitted jumpers and 50s-style feminine skirts or alternative-style dungarees, creating an overall effect that looks like the dolls have stepped right off the pages of an alternative women’s magazine (such as Australia’s Frankie), which fetishises the domestic, the home-styled and the “real”. This styling supports a fantasy that one can retreat into a more authentic world of natural beauty, eschewing the limits of oppressive gender norms and escaping the fakery epitomized by the glamour of the pre-made-under dolls. 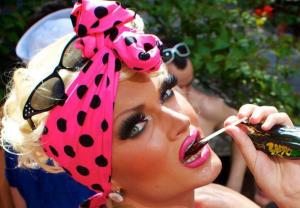 But, I hear you ask, isn’t a “stripped-back” simple style a less problematic norm than the make-up caked faces of the pre-tree-hugged Bratz dolls and Barbies? Perhaps not. The idea that we might adopt styles of self-presentation as if in a cultural vacuum, supports the circulation of more insidious gender norms. It presents us with the idea that there is a way to look like a “real” girl: and it certainly doesn’t involve wearing visible makeup.

Me playing drag queen at home in my 20s

When I was a child one of my favourite party themes was “make-up”, and on three separate occasions I held parties where my friends were expected to do-over their own and other’s faces – the only thing being that it was about being crazy, drag-queenish and fun. On my eighth birthday I ended up with green sparkly leaves coming out of my nose, purple fangs and giant blue eyes. The point of this story is that make-up can be about repeating expected styles of beauty, but it can also be very fun. While Bratz dolls might present a beauty style that is over-the-top and homogenous across dolls, the Tree Change Dolls also opt for conformity over experimentation.

As I have written previously, Bratz dolls encapsulate a sheer excess of femininity that is an indulgence rather than a necessity to attract a male gaze. Indeed, with the cult of natural beauty comes a sense that you can’t play around with beauty products or clothing if you want to – you’d just be reinforcing an always-already-oppressive style.

Monster High Dolls: similar yes, but experimenting with the limits of acceptable presentation

The reason to be deeply concerned about these Tree Change Dolls is that they represent a broader trend toward securing a fixed sense of what a real girl looks like – rather than disrupting the normal when it comes to gender. In fact it seems that Bratz dolls have evolved in recent years – into the now popular “Monster High Dolls”, which, though shiny and long-haired and “pretty”, adopt quirky, strange, monstrous stylings, transforming previous limits around normal looks. While there could be a lot more diversity of styles of gender presentation in these kinds of toys, the worst thing we could do is try and offer a “stripped-back” look that returns us to some kind of original “natural” point. Sometimes the natural might actually be the most fake of all.

409 thoughts on “The Trouble with “Natural Beauty””