I think we ought to treat pop stars as philosophers (as constructed as they are), citing them in our papers for their insights on the nature of existence and revealing to us the pulse and contradictions of dominant culture. But we must proceed with caution: like all philosophers, pop stars are often deeply problematic. On this note, I think LA rapper/singer Brooke Candy is worth exploring. She shows how all art is appropriation, but is a reminder that cashing in on subordinate cultures is vastly different from trying to rip open a norm from the inside out. She’s also an interesting case for what she does (and doesn’t) show us about the queer potential of femininity. 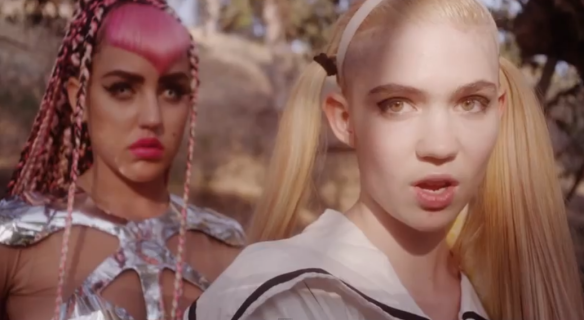 Candy provides the kind of sexual, aggressive, high-femme, esoteric visuals that follow firmly in the tradition of the mega-pop-queens before her, like Lady Gaga and Madonna. However when she first came onto the scene in 2012 with her clip for “Das Me” she was called out for cultural appropriation, along with others like Miley Cyrus who appeared to be cashing in on black culture.

Candy in “Das Me”

Candy’s stylisation referencing black culture was focused on at the time, but we might also note Candy’s fetishisation of disability as shown in the frame below, which is also clearly referencing Lady Gaga’s Paparazzi. As in many cases where cultural appropriation is pointed out, Candy’s would-be fans challenged her to try and speak from her own position instead. 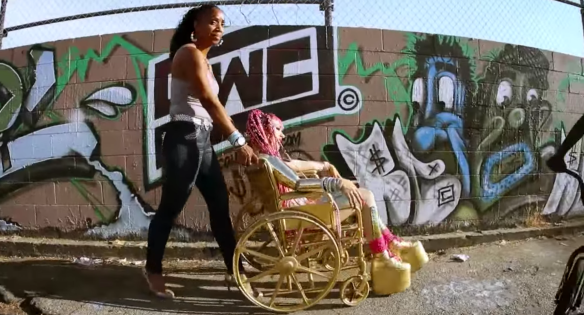 The woman pushing Candy along here seems to be saying to the director “Really? You don’t see how many levels of wrong this is?”

However, the problem with the demand to “speak only for yourself” is that it’s difficult figuring out what that should (or can) look like. How can we avoid appropriation in art when culture circulates in endlessly reverberating ways in a globalised world? After all, the postmodern turn taught us that truth is multiple, and that meaning ought not be essentialised in bodies or objects or things…right? The solution here might be: why not turn to the “norm” as a focus for your experimentation instead?

We can see this method playing out *some* of Candy’s subsequent work, where she engages with embodiments of “ideal” (white, blonde, pretty, and so on) femininity and amps it up.

From “Happy Days“: Candy plays on ideas of cuteness and sexual performance

From “Paper or Plastic“: Candy organises for her sister-wives to shoot their oppressor

From “Nasty“: Candy blurs the distinction between stripper and Victoria’s Secret Model, with camp sensibilities

From “A Study in Duality”: Candy thinks through the relationship between sex and death (among other things). Here she is shown wearing her feminine armour, which appears throughout many of her clips 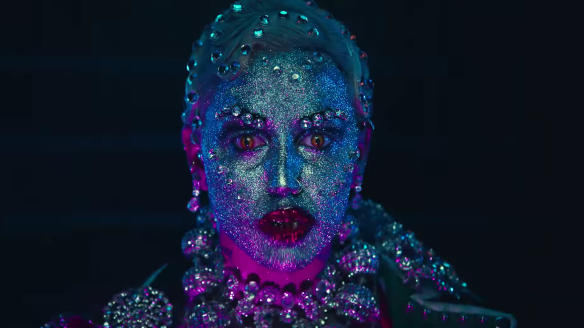 From “Opulence“: Candy explores issues of greed, death and power. Here Candy appears to be taking the trope “diamonds are a girls best friend” to a new level (though, it could also be argued she is tapping into imagery of Shiva)

Many of her videos contain Candy playing with being grotesque, violent, scary, overwhelming, sad, and hysterical at the same time as “showing” us her objectified body. What we gain from Candy as philosopher is an engagement with the idea of the queer potential of femininity. That is, where femininity can be made “strange”, where the expectations of sexuality and gender cannot be neatly contained. Often this borders into “cultural appropriation”, and Candy fails to cast off the overt symbols and accessories of marginalised cultures (which, really should tell us something about the “norm”).

Candy grew up in a remarkable context—her parents were divorced, and while her mother worked as a nurse, her father worked as the chief financial officer of Hustler magazine. Despite (or perhaps because of) this “duality” of life experiences, it appears that she has been signed to a major label and for all intents and purposes is as corporately-driven as other stars.

Herein lies one of the major problems of Candy: though she’s just like every other pop star trying to make a buck, she’s pretending she’s something “alternative”. As she stated in one interview: “We can watch the news and see what’s happening in the world or we can have our attention caught by some famous asshole in a red dress…Who cares who wore what at the Met Ball, it’s all fake bullshit. It’s a big fucking show”. The comment reveals (another) limit of Candy’s queer femininity: she thinks that somehow “putting it on” makes her more queer than those women at the Met Ball. In reality, the drag and camp culture that Candy revels in has always referenced the divas and the “assholes” in red dresses—in ways that is often about reverence and worship rather than cynicism.

What really differentiates Candy from her contemporaries on the red carpet?

If anything, Candy’s attempts to amp up aspects of her style to border on the “obscene” is that you don’t have to do amp it up to see the queer possibilities of femininity. Appropriation of the norm shows us how very contingent and unstable the norm already is in the first place. And if we rely on strategies of “turning up the volume”, we might accidentally fix that (Met Ball) femininity as “natural” and “normal” by comparison. Where does gender stop being drag stop being gender stop being drag? Of course this is Judith Butler‘s old point, but also as RuPaul reminds us, “we’re all born naked and the rest is drag”. This isn’t to undermine the experience that gender is an essential part of identity. In fact, it is rather to make a case for seeing gender as at once constructed and as something that we can’t fully choose. So the theory goes, questioning gender makes space for the gender yet to come.

Maybe this doesn’t recover Brooke Candy from her problems (she’s practically the Heidegger of the pop world). But it is a helpful case in thinking through the limits and possibilities of attempting to enact queer femininity. As it turns out, gender was never not-queer all along.