So last week I was asked to give a speech at my university’s local Mardi Gras celebration. Here it is:

“So what can I say about today’s Mardi Gras event? Well, I spend a lot of my days thinking about questions of gender, sex and sexuality, and the way in which we take up those specific identifiers that say, “Yes! This is who I am in the world”. I think that Mardi Gras is both about the personal and the political- celebrating who you are out loud, and demanding to be seen and heard. Mardi Gras is about opening up a space to talk about identity and belonging, and to have a discussion about things that might otherwise go unsaid and unheard.

As some of you may know, the Sydney Gay and Lesbian Mardi Gras changed its name to just “Mardi Gras” for this year’s festival. The organisers of the event said that they wished to promote greater inclusivity by dropping the “gay and lesbian”. And, as we celebrate our university Mardi Gras event today, we stand under a similar banner, designed to promote respect and equality for all people, no matter their sexual orientation.

While a central aspect of Mardi Gras might be inclusion, how do we make sure we don’t lose the alphabet soup along the way? I’m talking here about the ever growing acronym- LGBTIQAP, Lesbian Gay, Bisexual, Transgender, Intersex, Queer, Asexual, Pansexual… I could add more. How do we maintain our pride for who we are, without getting lost in the milieu of inclusion? While I agree that we are all equal despite questions of gender or sexuality, issues of visibility are ever-present. Being recognised, acknowledged, and respected for the person that you are, is a big deal.

Well, my thoughts on this are: say it out loud. For example, I am proud to say that I am a bisexual, queer, femme.

But this isn’t about labelling or having to “fit” into specific categories- it’s about naming our diversity and opening up new areas of discussion about identity.

So let’s take this opportunity today to remember the alphabet soup, and in doing so, welcome everyone and anyone, under the ever expanding rainbow.

Recently, I was at a party where a Kylie Minogue CD was on rotation (I think it might have been Ultimate Kylie), much to the enjoyment of one of my femme friends. This got us talking about the “gay” icons that we enjoy like old Madonna and Lady Gaga, our love of the colour pink and our preference for a queer rather than straight description of ourselves. Following this, we considered the notion that maybe we could identify as being gay men in women’s bodies.

I wondered if such an identity descriptor was already in existence, and it was this that led me to the term “girlfag“- which refers to women that identify as being sexually attracted to gay men and/or gay subculture. I also discovered that several (straight) stars have described themselves as being “a gay man in a woman’s body” (for example, Posh Spice and Mila Kunis, though note: neither of them use the term girlfag!). On reflection of this sentiment however, I realised that it was somewhat problematic. Mainly, the trope of “trapped in the wrong body” is commonly cited by transgender people, who report gender dysphoria. Considering this, it wouldn’t be good if the expression my friend and I favoured was read as an offensive parody of trans identities. However, even if we nuanced our statement to reflect that we were akin to gay men in women’s bodies but that this didn’t impact upon our gender presentation, there are still further complications. Basically making this claim about our identity would entail making a parallel claim about what it is to be a gay man, which is therefore not cool on the reinforcing stereotypes stakes.

Despite these issues, I still think that there is some merit to the girlfag positioning. Basically my friend and I were reflecting a desire for queering our supposed girly-ness. Mapping our love for certain feminine things onto a gay paradigm allowed us to queer our femininity. I have always felt that there are things that I love that align with classic gay iconography (but then again this might be because there has been a lot more said about gay icons than lesbian, bisexual or other ones). And certainly the idea that I had more in common with a flamboyant gay man than a straight girl would ring true for me (for example, I once took a date home and played her the best-of CD “The Magic of Doris Day”, which didn’t really set the lesbian tone I was hoping for…).

So, maybe we’re not quite girlfags, but then again maybe we can embrace our “stereotypically-gay” tastes as part of a new lesbian/bi/pan dynamic of queer femininity. I hope so.

I came across this great ad (that has gone viral) by Australian grassroots protest group GetUp! on the website Lesbian Dad. The ending is very moving, but bittersweet given the recent decision of the Australian Labor Party to allow a conscience vote on gay marriage, rather than incorporating a change of stance on the issue into the core party platform (this means that the bill to reform the Marriage Act is likely to get vetoed by the opposition when it comes to Parliament).

My response to this ad, and to the issue of gay marriage more generally is always one of support for reforms to the current law to remove any discrimination. I do however acknowledge the thoughts of those within GLBTQIQ circles that are vehemently against the concept of gay marriage. And this ad (after bringing tears to my eyes) got me thinking- just how can this issue be negotiated in a way that both removes discrimination based on sexual orientation, but that doesn’t detract from other political action around issues of sex, gender and sexuality. My biggest fear is that gay marriage may already be viewed as an “end of history” moment, where marriage is seen as the final marker of the equality battle. In fact, this article published in The Guardian today welcomes a “post-gay” future. 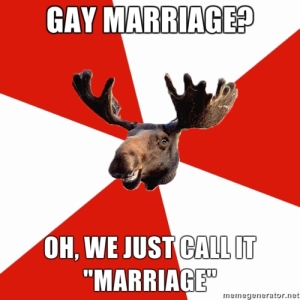 While many gay and lesbian people may rejoice in the possibility of marriage, many “non-heteronormative” others may find themselves left by the wayside when it comes to collective action (such as marriage within the polyamorous community- though they have noted that gay marriage would be a significant step toward possible poly marriage in the future). But the issue of “assimilation” runs deeper than the ability to win political gains- it’s a matter of the direction in which that change is won. A world in which a conservative ideology of marriage and “family values” is envisioned as the ideal end point for all relationships is concerning, because it overlooks and subsumes difference and different ways of “doing gay”. When Jane Lynch presented How I Met Your Mother star Neil Patrick Harris with the LA Gay and Lesbian Centre award earlier this year, she proclaimed that Harris and his partner had, “created the most stunning gay American family portrait“.

My hope is that with every “win” on the board we can stop and acknowledge the power of the political, and think about the way in which our new “norms” might affect those left behind.

The new "Mardi Gras" logo: I smell a heteronorm

There is some disenchantment within GLBTQIQ communities over the 2012 Sydney  Mardi Gras’ attempt to be “inclusive”. There has been some media coverage of the issue and  you can join the Occupy Mardi Gras Facebook group here. Some are questioning the step toward heterosexual inclusion that the organisers have now cemented through the re-naming (read their justification here). The Mardi Gras has a history of discrimination within GLBTQIQ ranks. The name “Gay and Lesbian Mardi Gras” never really captured the alphabet soup (and admittedly, neither does the acronym that I am using here), and it wasn’t long ago that the likes of trans, bisexual and intersex people had to pass a “gay threshold” just to come to the after party. However, the new name change does nothing to embrace plurality as such- as some commentators have pointed out, why not put “Pride” at the front of the Mardi Gras title?

What I find most off-putting about the current re-branding shenanigan is the new symbol that has been chosen (to  sit alongside the iconic opera-house-esque logo before it), which to me, REEKS of something like this —>

The new "Eternity" vision for Sydney: let's all move to the 'burbs shall we?