This October I was lucky enough to be supported by the YWCA Canberra and the ANU, to attend the Femme Hive conference in Berlin. With my PhD work focusing in large part on femme identity, the conference provided a rare opportunity for me to meet femmes outside of an Australian context.

If you’re currently wondering “what even is femme and why is there a conference on it?”, check out this great explanation of femme identity from Queer Fat Femme Bevin Branlandingham. Many people have not come across the term femme before, and even some people I spoke to at the conference were unsure of what the term meant. While the conference was organised around feeling empowered about being queer and feminine identifying, some people were there because other people had labeled them as femme (e.g. lesbian couples are often confronted with the question “so who’s the woman and who’s the man in the relationship?” as if every time there must be a butch/femme pairing). A lot of people at the conference just wanted to find a space where they could feel comfortable being accepted as queer, where their feminine appearance was not simply dismissed as heteronormative. 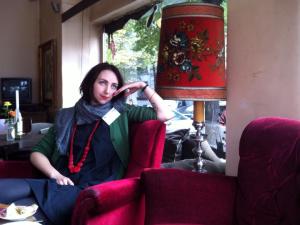 Unfortunately when I first received the grant from the YWCA, a local gossip magazine here in Canberra ran an article on me titled Queer Femme Is? which challenged the legitimacy of femme identity and biphobically mocked me as “a gal who likes hanging around with lesbians but prefers the closer company of a boyfriend”. This hostility was the first reminder of exactly why femme is an important topic for discussion – because so many people can end up feeling marginalised both within LGBT scenes and in the broader community, just because they are more “feminine” and therefore don’t fit within a neat set of assumptions about “deviating” from the norm.

While the conference program was full of wonderful workshops, the best part for me was just listening to people’s own experiences of being femme within a queer community. Apparently in Berlin femme identity doesn’t carry much cache in the queer scene, and it was interesting that the conference organisers talked about “cultivating a culture of desiring femme” as one of their main goals. Significantly, the opening night of the conference involved a burlesque/drag/musical show, with a very diverse range of acts from across Europe exploring the theme of femme. The venue, Schwuz (a club that had a long queue, entry requirements of an airport and sold grapefruit beer), was packed, with more people sporting undercuts than I had ever seen gathered in one room. The acts revealed the complexity of femme, with each one so different from the last that it was impossible to settle on a concrete idea of femme identity’s common denominator.

The flyer for the Femme Party

One particularly interesting piece focused on fat femme identity. Presented by the burlesque group B.L.U.S.H., one of the performers came out wearing a dressing gown, reading a women’s magazine. After showing disappointment that her larger body did not match the bodies shown in the magazine, she tore it up and stripped down entirely. Her body was round and tattooed. She slowly put on knee-high stockings, high heels and lingerie. To a huge cheer from the audience she took out a chocolate brownie from a box and smooshed it into her face, broke off several pieces and threw them into the audience. Openly didactic, this performance was interesting in terms of exploring the body politics of femininity (what is an acceptable “size” for feminine bodies). Indeed the question of “normal” bodies and the marginalisation of fat queer feminine bodies was a key topic of discussion in the conference overall. The performance was also interesting because it alluded to the “putting on” involved in femininity, without marking this as a negative thing (as femininity is so often accused of being a “masquerade” in feminist and other writing).

Getting my ideas together prior to presenting at Femme Hive

Of course it wasn’t all burlesque and glitter. A weekend of workshops followed and I was lucky enough to present my research work on the last day. My presentation was called “Feeling Queer Femme: Assemblages and the Body” and in it I explored the troubles of representing (trying to “pin down”) femme, as well as the corporeal and sensory aspects of embodying femme (a theme that emerged in my interviews with queer femmes in Australia). Though it was a bit strange presenting my version of femme to a room full of femme people, it was amazing to hear that attendees found the session so helpful for clarifying their own experiences and ideas on the topic, even though this was something they were living out day to day in their own lives.

Overall the experience was amazing and my ideas on the topic of femme have both been affirmed and expanded through attending Femme Hive. Now to finish writing that thesis of mine…