I went to a Women of Letters event yesterday – a fantastic evening listening to some well-renowned women (including the fabulous Melanie Tait and Eva Cox) read out letters on the theme of re-writing history. After the letter-reading session, there was a panel on “divergent ways” hosted by Scissors, Paper, Pen of Canberra. But when one of the curators of Women of Letters, the talented Michaela McGuire (the other being the spunky  Marieke Hardy), was asked a question about letter-writing as gendered, I was surprised at her response. Michaela suggested that perhaps letter writing and the desire to express oneself with pen and paper (or computer and paper!) is more of an innately womanly pursuit. Furthermore, Michaela pointed out that yes, Women of Letters was made up of mostly “female” speakers.

Now, Michaela has stated in the past that she questions whether she calls herself a feminist or not, and has got some flack for running predominately woman-focused events. So given this acknowledgement I wouldn’t want to call Michaela out for her essentially essentialist statement on women. But it did remind me of the struggle that I often personally encounter with talking about “women” versus “men” as well as the problematic interchange I often make between the words “woman” and “female”. 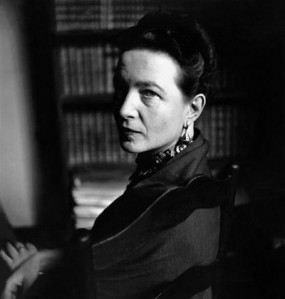 Simone de Beauvoir famously stated, “One is not born, but rather becomes, woman” (in the new translation by Constance Borde and Sheila Malovany-Chevalier). Following de Beauvoir, feminist writers have been keen to highlight the difference between sex and gender (of course not everyone sees it that way). On the surface of things, this argument amounts to the idea that sex is in reference to a determination male vs. female made at birth based on genitalia, while gender involves a process of acculturation, learning the expectations of what it means to be a “real” woman or a man (e.g. real men wear suits not dresses). Of course, then Judith Butler came along and posited that sex is caught up in a similar process, but that’s another story…

The point is that for the most part, much feminist writing has attempted to draw a very clear distinction between sex and gender- i.e. “female” and “woman” carry very different meanings. So while we might want to say that femaleness is biological (though this is questionable and hardly clear-cut as JB points out, and as intersex conditions demonstrate), the category of woman holds the weight of a history of socialisation involving certain gendered roles.

Then again, transgender/trans* came along and reminded us that there is a lot more to gender than just socialisation- some people desire transition from one sex and/or gender to another (or something in-between or outside of). PLUS trans* reminds us that gender isn’t just about masculinity or femininity- e.g. you can be assigned female at birth, become a man, but present as feminine (see Femme FTM). So what does it really mean when we say “woman”, “feminist” or we attempt to categorise what “women” are like? And doesn’t an awareness of the sex and gender distinction render attempts at answering any of these questions really really difficult?!

Academic and poet Denise Riley expresses her apprehension toward identity categorisations, reminding us that terms fluctuate in meaning over time and context. Nevertheless, Riley acknowledges, “While I can’t think why I’d want to utter that chilling phrase ‘speaking as a woman’, I can think of situations in which it could be my lot to cough pointedly from the back row, ‘But what about the women here?’” While I hold many concerns about using the term “feminist” (noting its tricky devotion to the gender binary), I still fill with rage, for example,  when I think about the under-representation of women in the philosophy discipline (see my philosophy women tumblr here, they do exist!- Did you know that a bunch of Pythagoras’ teachers were women? No? Well, they totally were!).

On so many recent occasions I have found myself struggling to express my feminist sentiments in non-essentialising ways. Certainly relying on the interchangeability of the terms “female” and “woman” is something I trip up on. When talking about even the most general things, such as the difference between dating men versus dating women, I am prone to making the most lurid generalisations that blur the line between sex, gender and “natural” traits. And, while I know I am guilty of this, I still cringe when I hear women speaking about their natural proclivities for sharing, being supportive and caring, etc. While we continue to promote these ideas about innate difference, we in fact produce them.

Are women more prone to letter writing? Maybe. But surely that is not something we are born with.