I recently read a great piece in by Benjamin Law on the trials and tribulations of Christmas in a post-nuclear (family) world of divorce, sex before marriage and gay partners (you can read Law’s article from the Griffith Review here). It got me thinking about my own experiences of Christmas and the emphasis placed on family for this particular holiday.

From memory I have only experienced  one “proper” family Christmas on my mum’s side, when I was still in primary school. My very limited memories of this involve trifle (good) and fighting (bad), and I’m pretty certain the family gave up after this one rather unpleasant attempt. Growing up solo with my mother, a self described “pagan/wiccan“, meant that Christmas was pretty understated (that is, when we finally started to celebrate it- when I started school I heard that I was missing out on a lot of capitalist present-receiving shenanigans). So Christmas time in our family was more about celebrating the solstice, getting out into the sunshine, onto the beach and hanging out with all of the other coastal orphans and odd bods. Christmas was a blip on the radar in our house, and overlooking the delights of the anti-capitalist traditions my mum was trying to indoctrinate me with, I longed for beliefs in santa and waking up to pillow cases full of presents.

When I started dating in high school however, I realised that I could be adopted into other people’s families and finally revel in traditional Christmas festivities. I’ve done this for many years, and have always been so pleasantly surprised at how welcoming people are to the strangers that happen to be sleeping with a member of their family. Viewing other people’s Christmases finally allowed me to realise that no family really fits the “nuclear” set up after all- while I had wanted to go back to some 1950s family portrait at Christmas time, it turns out that everyone’s households are always a bit more complicated than that. 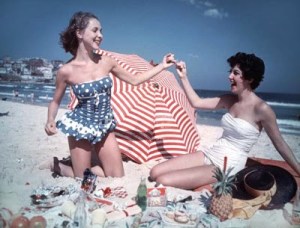 Soon the whole world will be able to celebrate the joy of Christmas in summer time- happy climate change!

I look forward to the day when extended ideas of family exceed current TV representations, such as seen on Modern Family, which can’t help but stay in the model of family as meaning parents + children. Whether those parents be “traditional”, divorced or a gay- it’s still a model based on child rearing and stable marriage-like relationships. What I found out from my Christmas-crashing is that families are diverse groupings, often a patchwork of extended kin and partners: ex-es, in-laws, step-persons, friend-lings and orphan-nomads.

So I hope that you all have a safe and merry solstice- I’ll be at the beach with some adopted family if anyone needs me.